It is the end of day three at the American Association Advancement of Science conference 2013 and I am exhausted. There are two more days to go, so here’s a very brief summary of some of the event highlights for me.

1. Science Film Showcase
This is technically not part of the conference, but it was sponsored by the AAAS and it was on Wednesday night before the conference started on Thursday, so I’m going to count it in. Five Jackson Hole Science Media award-winning films were presented (short clips from the films). I was truly pleasantly surprised by the film, Concorde: Flying Supersonic, because it was the film that I was least interested in but it ended up being the one that I wanted to keep watching the most. Concorde was a supersonic passenger jet that flew commercially for twenty-seven years and a major crash in 2000 in France killed all 109 people onboard, and four on the ground. The filmmakers did a really great job setting the story up in the beginning that just made me want to know what happened in that story and keep watching the film.

2. Breakthroughs in our understanding of primate cognition and psychopathology
This was a press conference that I attended on Thursday afternoon, and I was quite amazed by a video that Tetsuro Matsuzawa (Kyoto University) presented. Matsuzawa has worked with chimpanzees, including Ai the main subject/character, for several years to learn more about their brain capabilities. Turns out, chimpanzees have an amazing capacity to remember things. You can read more about their research here, and do watch the video below of Ai.

3. The Robotic Moment: What do we forget when we talk to machines?
This was a plenary lecture on Friday, given by Sherry Turkle from MIT, about the interactions between people and social robots. I seriously did not expect myself to be moved, truly, by how sincere and passionate Turkle was in her lecture, when she was talking about how people have shifted from connecting with each other to connecting with technology. Turkle described situations that she encountered about her subjects, some children, some elder people, and how they felt safer and more comfortable with social robots as compared to people. To me, much of that came from people’s fear, because a robot can’t say no, a robot can’t walk away and a robot can’t hurt your feelings like a person could. I can’t believe how interested I am now in that topic and I’m going to work on getting Turkle for my profile assignment that’s coming up next month.

4. Translation of Mussel Adhesion to Beneficial New Concepts and Materials
This was a symposium that I attended very briefly this morning, about mimicking the strong adhesives produced by mussels to produce similar ‘glues’ that can be used in surgery. I was attracted to this lecture mostly because of my chemistry background and I was interested in learning about the polymer chemistry in the mussel adhesives. However, what got me really into the topic was the application to fetal surgeries. Apparently, there is currently no procedure to help mothers whose fetal membranes have broken, and all they can do is to hope and pray that their babies do not get infections, or that labor is not induced until their babies are ready. These new mussel-inspired glues could be suitable for repairing the ruptured membranes, and the researchers are already testing on rabbit amniotic sacs.

Anyway, so that’s it for now, and of course there was the Kavli reception at Fenway last night (epic), the internship fair this afternoon (mentally and socially draining) and the New England Science Writers gala this evening (too tired to fully enjoy it and network, but oh well). Not to mention the thrill of being at a conference as press for the first time, and hopefully many more times to come. 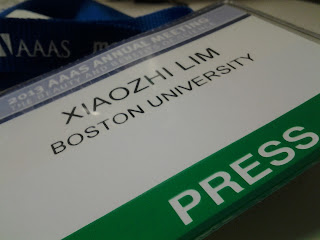