This is what I know of carbon dioxide – it is produced when carbon-based material, including fossil fuels and carbohydrates, is burned to release energy. At certain levels in the atmosphere, it causes atmospheric warming to a certain degree. (I do have some very strong convictions about climate change but I am trying really hard to be objective and neutral about this, hence the ambiguity.)

There are several ways to get it out of the atmosphere, including plant photosynthesis and bacterial activity. Several synthetic research fields have also been working on using carbon dioxide as a source of carbon, rather than . However, I have just been introduced to a whole new concept, coined the carbon dioxide fertilization effect, when I came across an article published last week in Nature Climate Change.

Now, the argument sounds very logical to me, and the immediate consequence would be that perhaps, elevated levels of carbon dioxide in the atmosphere isn’t all that bad. In fact, from a Google search, this is one of the main arguments that climate change skeptics pull out. Yes, carbon dioxide levels are rising, BUT it’s accelerating the growth of plants which will consume more carbon dioxide, so it really balances out in the end.

Then comes the million-dollar question – the scale of this fertilization effect.

Part of the challenges involved in answering that question includes the other limitations to plant growth. I grew up in a city and only occasionally helped my mum water the five potted plants outside our flat, but I did learn in middle school that there are three elements essential to plant growth – Nitrogen, Phosphorus and Potassium. Using the concept of limiting factors (if you’re not sure what that is – imagine you’re trying to bake a batch of muffins and only have a teaspoon of baking powder left. No matter how much flour you have in your cabinet, you can only make as many muffins as that one teaspoon of baking powder would allow), if there isn’t enough nitrogen, phosphorus or potassium available to the plant, the atmosphere could become saturated with carbon dioxide and that would not affect the rate of plant growth at all.

Which was what the results of the 13-year study suggested – that there might not be enough nitrogen in the soil to support a higher rate of plant growth to match the higher levels of carbon dioxide. Even so, the study is not without its assumptions and limitations, and the authors acknowledged that more long-term studies are required. However, given the current lethargy in the general public opinion towards climate change, the authors concluded in the last line –

“Unfortunately, funding for such studies is scarce, suggesting that this key knowledge gap will not be filled anytime soon.”

In the meantime, the giant experiment that we are conducting on our environment goes on. 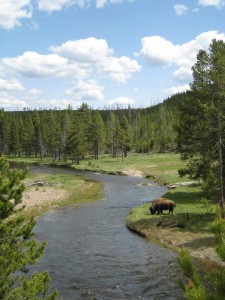 How to make the most of carbon dioxide