I had a darn exciting morning yesterday. It all began on Saturday, when I saw a last-minute call for a production assistant from my former professor of Boston Science Communications, saying that he needed help for a shoot at MIT’s fusion lab.  Well, I didn’t quite know what was going on, but of course I jumped at the opportunity.

So I got to the Plasma Science and Fusion Center’s visitor center/headquarters at MIT ten minutes early, and there was no one except for another lady waiting. We were both at the wrong place. She turned out to be a reporter from the Boston Globe, there for the same thing as I was. And when we got to the right place, the Alcator C-Mod experiment building, there were two TV crews outside: Fox and WCVB. By then I was just thinking, what’s going on?

Turns out I haven’t been following the news. First of all, MIT has a big fusion machine, called the Alcator C-Mod reactor. (I knew they had a fusion center, but I thought fusion was all theoretical, you know, still in people’s heads. I was quite wrong. There’s a pretty amazing virtual tour of the inside of the machine here.) Second of all, the fusion center lost half of their funding from the Department of Energy late 2012 and they had to shut down the Alcator C-Mod reactor. Through last year, some Congress members from Massachusetts, including Senators Elizabeth Warren and Mo Cowan, worked to get the big machine’s funding back, and they did. So yesterday morning was the Alcator C-Mod reactor’s official re-start. Senator Elizabeth Warren and Representative Katherine Clark were there to press the button, hence all the press. 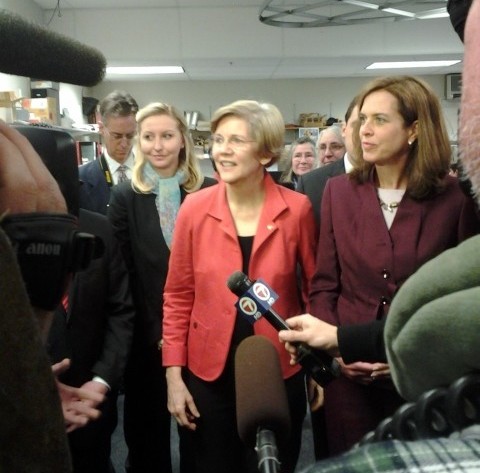 From left to right: Anne White, Assistant Professor of Nuclear Science and Engineering; Elizabeth Warren and Katherine Clark, Massachusetts Congresswomen at a press interview in the Alcator C-Mod research facility at the end of the restart ceremony and lab tour.

So why is fusion such a big deal? Before I went for this shoot and saw the Alcator C-Mod (they let us all go into the room where the big machine is and we all had to wear hard hats), my ideas of fusion were that it is a near-impossible feat that will save mankind, if successful, but it mostly belonged in the movies. I mean, even the sound of it is incredulous. Fusion is the process that powers the stars, where conditions are so hot that light nuclei combine and release lots of energy. OK, and all we have to do is to re-create the conditions of the stars on earth in a sustained way within a machine like the C-Mod and hook it up to a power plant.

It sounded so much like science fiction, but after all the “ten, nine, eight, seven, six, five, four, three, two, one” and plasma flickering across giant screens yesterday and actually seeing the big machine, fusion became much more believable. I guess if scientists can find the Higgs boson, they should very well be able to achieve fusion. Just how far away it still is, no one can tell. But the main thing, which Warren completely got right, is that funding for this kind of high-risk-high-reward long-term research cannot be renewed year after year. For Pete’s sake, these scientists already have a heck of a problem to figure out, how to re-create a star on planet earth, let alone fret about how to keep their experiments going at the end of every year.

Time To Face The Thorium

Do The Molecule Dance Has A New Home!

Landscaping science – now and an example in history

Fish, mercury and ADHD
YARPP powered by AdBistro
Powered by