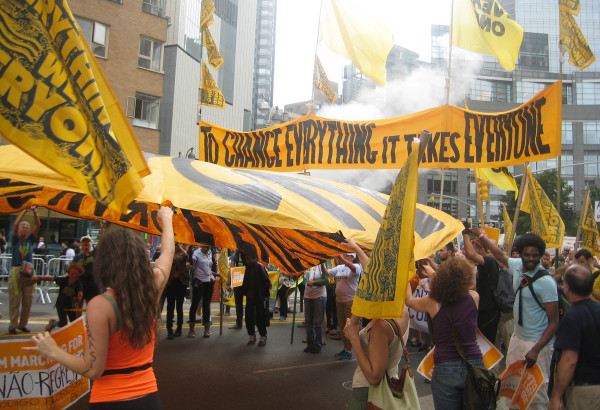 My long, long, long over-due thoughts on the People’s Climate March. Let’s talk about the last segment of the march: To change everything, it takes everyone. It’s a nice idea: people, regions, countries all coming together to tackle climate change, with the conspicuous absence of China and India, two of the largest greenhouse gas emitters. And a day after the United Nations’ climate summit, India environment minister Prakash Javadekar said, “What cuts?” Clearly, India has no intention to prioritize greenhouse gas emission reductions.

Javadekar’s not wrong. “To change everything, it takes everyone” lacked a caveat. “Everyone” should really refer to “everyone, who have washing machines.”

Not everybody can afford to care about climate change. Over 1.3 billion people worldwide have no access to electricity (read: electricity, not TV or the internet), according to the International Energy Agency. The first priority for them should not be climate change, or any environmental issue, but to get electricity and probably also clean water, sanitation, healthcare, education, birth control … everything that’s needed for a decent standard of living.

And that means 1.3 billion people in the world need to consume far, far more energy than they do today. Which in turn means that they need to emit their fair share of carbon emissions, and then they can think about climate change and climate action.

Instead of a blanket call for emissions reductions, which is clearly unfair to those who have not consumed enough, I think it makes more sense to think of this in terms of a balancing act. Those of us who can, who already consume more than we need, yes, we need to take action. In fact, we need to make more dents in our carbon emissions than necessary because rich countries should help to compensate for the extra emissions coming from developing nations.

Statistician extraordinaire Hans Rosling explains all of this beautifully in the video embedded at the end of this post, “The Magic Washing Machine.” He uses the example of a machine that nobody can live without, not if they’ve started using it: the washing machine. I have washed my own clothes by hand, and hung them out to dry on bamboo poles back in Singapore. Not very much, but enough for me to really appreciate having a washing machine and a dryer living in Boston. I gladly pay an exorbitant $2.75 per wash to do it in the machines in my apartment building’s basement. And I agree with Rosling, everybody should have access to a washing machine. “Even the hardcore in the green movement use washing machines,” Rosling says in this TED talk.

But I think there’s no need to feel bad about using a washing machine. Machines consume energy, yes, but look what they give us. Washing machines and dryers give us free time to read, write, paint, learn … you name it. Air machines, what Rosling calls planes in the video, take us to different parts of the world and enable us to see and experience how others live. Machines are good. What matters is how we use them. We can use them efficiently – run only full loads in the washing machine with cold water – and we can use clean power to drive our machines.

But that’s for those of us who have machines to think about. There’s no point saying that there’s no use taking climate action in the U.S. if China and India are not on board. The reverse is true: the U.S. and other nations with means, including my own teeny-tiny country Singapore, need to take more action so that China and India can get on board, once their people have access to washing machines.