I like to think of myself as an environmentally-conscious person who tries to save energy and reduce my carbon footprint. But there are times, like now, when I just want to keep my apartment warm enough to wear shorts and not feel guilty for contributing to carbon dioxide emissions. What if we could recover the carbon dioxide molecules that’s produced from burning fuels and quickly convert those molecules back into energy-rich fuel molecules? It’d be a different story.

In fact, researchers have been working on carbon dioxide capture and transformation since the turn of the century. One strategy is to use existing machinery in nature that is wired to process carbon dioxide: photosynthesis. Today, the ethanol mandate, which forces oil and gas companies to maintain a certain percentage (varying by state) of ethanol in their gasoline, does just that. Corn that is grown, processes carbon dioxide into a part of itself and then the corn gets processed into ethanol, a fuel.

Except, there is a slight inconvenience that corn is also food, and with the worst drought in 50 years last summer, some 40% of America’s corn crop will end up as ethanol in cars rather than in hungry people’s stomachs.

But this conflict between food and fuel can be avoided. There are other organisms, much simpler organisms which can be more easily controlled, that also photosynthesize. Cyanobacteria is an example. Commonly seen as blue-green algal blooms in oceans or rivers, cyanobacteria is a type of bacteria that feeds and grows in the same way plants do, by combining energy from sunlight with carbon dioxide molecules. In Yellowstone National Park, many hot springs have yellow cyanobacterial mats around or near them. 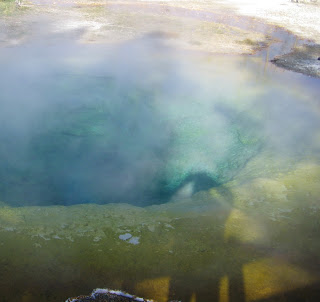 The yellow ring around the pool is because of the cyanobacteria that live there.
Morning Glory hot spring, Yellowstone National Park, summer 2007. The shadow is of me taking a photo.

Recently, a team of researchers from the University of California, Davis, and Asahi Kasei Corporation has managed to genetically engineer a type of cyanobacteria to make them produce useful chemicals from carbon dioxide. These findings were published last week in the Proceedings of the National Academy of Sciences.

First, the researchers picked a cyanobacteria to modify, a target product (for those of you who want to know, it’s 2,3-butanediol, a versatile molecule, and therefore valuable, in chemical synthesis) and a pathway in bacterial metabolism that will get carbon dioxide to that product. The pathway is a simple three-step process, involving three enzymes that drive each step forward.

Sounds like they might have to repeat for countless times before they get a good result? Not really. According to Shota Atsumi, principal investigator of the study, his team “carefully picked out a target chemical and carefully designed a biosynthetic pathway,” so they only had to test six possibilities, which was “manageable.” First, they chose a non-toxic target product, so that the cyanobacteria would not be killed by it. Second, the researchers chose steps in the pathway that were irreversible so that the process could only go forward. Third, photosynthesis produces oxygen, so the researchers ruled out all the enzymes that would be inactivated by oxygen.

But practically speaking, these results are far from what’s needed to be able to get these cyanobacteria working to produce fuel and chemicals for us. There are a lot of challenges to be overcome in scaling up, sustaining production for a longer period of time and to keep costs down. So far, this work is just a proof-of-concept that cyanobacteria can be engineered to produce specific molecules from carbon dioxide efficiently by design, according to Atsumi.

And for now, I dream of the day when I can take a hot shower for as long as I want without feeling guilty that I am contributing to carbon dioxide emissions because scientists have finally managed to make our fuels and chemicals out of carbon dioxide. 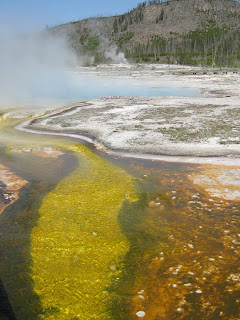 A cyanobacterial mat next to a hot spring. Yellowstone National Park, summer 2007.

How I Changed My Mind On Ethanol Biofuels

An open letter to the EPA