Last Wednesday, the first large-scale commercial cellulosic ethanol plant in the United States, Project LIBERTY, opened officially in small-town Emmetsburg, Iowa. The plant is expected to turn 570 million pounds of agricultural waste like corn stalks and husks into 25 million gallons of ethanol each year, according to Amanda Peterka’s report for Greenwire.

Cellulosic ethanol has come a long way. It used to be something that scientists say is five years away, every five years when you ask them (just like fusion energy). But now it’s real. For someone who doubted biofuels like me, demonstrating that commercial cellulosic ethanol production is viable is a big mind-changer. Here’s why. 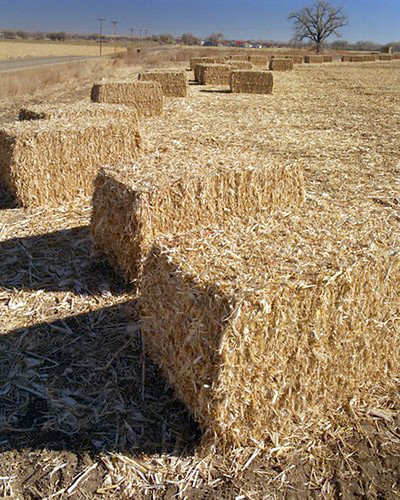 Corn stover that is normally wasted can be used to produce ethanol for cars in a cellulosic ethanol plant. Image courtesy of Idaho National Laboratory Bioenergy Program (www.inl.gov/bioenergy)

Let’s begin with climate change. Climate change threatens our current ways of life, especially the way we transport ourselves and things. The transportation sector contributed 28% of the U.S. greenhouse gas emissions in 2012, and a big reason is because most vehicles on the road burn gasoline. But unlike gasoline which comes from petroleum reserves and releases millions-of-years-old carbon into the atmosphere, biofuels like ethanol come from existing atmospheric carbon dioxide. Crops like corn convert atmospheric carbon dioxide into sugars, which are then converted into ethanol that’s blended into gasoline to power cars.

Because of that, biofuels look like they could be a climate-friendly, and people-friendly fuel. They do not contribute carbon into the atmosphere, do not require major changes in car engines, and they have gasoline’s valuable properties as a fuel: easy to transport, easy to use everywhere, doesn’t degrade over time. That’s why the Renewable Fuel Standard was signed into law in 2005 to force oil producers to blend in increasing volumes of ethanol into their gasoline each year.

The problem and the root of the controversy over biofuels and the Renewable Fuel Standard in the past few years was that ethanol came from a food crop, corn. The Renewable Fuel Standard created a false demand for corn that competes with food demands. It wasn’t so bad when it began; in 2005, it took only 10% of the United States’ corn crop to produce the amount of ethanol required. Fast-forward seven years to 2012, almost half of the corn produced went to feed cars instead of people. It was a combination of the significant amounts of ethanol required, and a historic drought that crippled the corn crop. The price of corn skyrocketed to $8 per bushel in 2012, up four-fold from 2005. The New York Times ran an excellent piece in January 2013 detailing how biofuel laws in the United States and Europe affected the hungry in Guatemala. To top it off, corn is a very demanding crop that consumes lots of water and depletes the soil of essential nutrients. All that for only marginal greenhouse gas emissions savings.

Those are unintended consequences of the Renewable Fuel Standard. There were plans to transition the ethanol industry from corn to so-called advanced biofuels: ethanol or other hydrocarbon compounds made from cellulosic sources like agricultural waste and perennial grasses, or even from algae. The unforeseen part was that research in advanced biofuels did not mature fast enough for cellulosic ethanol to take up the baton; critics referred to cellulosic ethanol as “phantom fuel” for years. Supporting the ethanol industry for unknown future benefits in advanced biofuels while it eats into an important food crop didn’t seem right.

But now, with the opening of Project LIBERTY, cellulosic ethanol is no longer a phantom fuel. The plant is going to turn waste material into fuel. And cellulosic ethanol has about 60 percent less life-cycle greenhouse gas emissions than petroleum gasoline, according to a U.S. government analysis. All this looks like a win for people concerned about reducing our greenhouse gas emissions to try to mitigate climate change.

I would say that for the ethanol industry as a whole to help mitigate climate change while maintaining our standards of living, the key is finding ways to break away from corn. Project LIBERTY is a big first step. The EPA could do well to help the ethanol industry along by giving cellulosic ethanol priority over corn ethanol: requiring that the mandated ethanol volume be filled first with cellulosic ethanol before it can be filled with corn ethanol.

An open letter to the EPA